The Sorceress: A Review 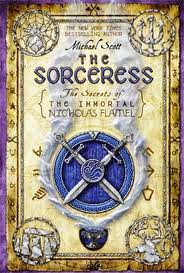 Book Three in the New York Times bestselling series.
Nicholas Flamel's heart almost broke as he watched his beloved Paris crumble before him. The city was destroyed by Dee and Machiavelli, but Flamel played his own role in the destruction. Sophie and Josh Newman show every sign of being the twins of prophecy, and Flamel had to protect them and the pages from the Dark Elders.

But Nicholas grows weaker with each passing day. Perenelle is still trapped in Alcatraz, and now that Scatty has gone missing, the group is without protection. Except for Clarent—the twin sword to Excalibur. But Clarent’s power is unthinkable, its evil making it nearly impossible to use without its darkness seeping into the soul of whoever wields it.

If he hopes to defeat Dee, Nicholas must find an Elder who can teach Josh and Sophie the third elemental magic—Water Magic. The problem? The only one who can do that is Gilgamesh, and he is quite, quite insane.

Ah. Another fun book in this series.

In this book, Sophie and Josh are traveling though London, one of the most dangerous places they could be. For London belongs to John Dee.

Creatures from ancient tales and folklore roam throughout the city, drawn to Sophie and Josh's silver and gold auras.

So of course it is only a matter of time before all the monsters come for them.

I'm beginning to like Sophie more and more. As for Josh, I don't really know what to think. Sophie stands firm and is confident, while Josh appears to waver. His suspicions are growing more paranoid--which will only lead to trouble.

I liked the new characters we got to meet. Pally and Shakespeare. Yes. THE Shakespeare. It's fun to see which historical legends Scott has made immortal.

Perenelle Flamel is as powerful as ever, even with her waning aura. I'm really starting to like her. Although, she remains mysterious and dies at some times, act questionably.

As for Nicholas Flamel, his edge is dying. He is considerably weak, and is having a hard time keeping his cool. I can understand why Josh is suspicious of him.

I'm really enjoying this series. The adventure and folklore are genius. I can't put these books down!