The Name of the Star: A Review 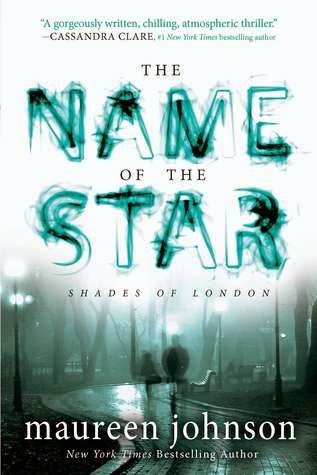 Jack the Ripper is back, and he's coming for Rory next....

Louisiana teenager Rory Deveaux arrives in London to start a new life at boarding school just as a series of brutal murders mimicking the horrific Jack the Ripper killing spree of more than a century ago has broken out across the city. The police are left with few leads and no witnesses. Except one. Rory spotted the man believed to be the prime suspect. But she is the only one who saw him - the only one who can see him. And now Rory has become his next target...unless she can tap her previously unknown abilities to turn the tables.

This was certainly an interesting book. I remember picking it up at the store and seeing the huge label on the back about Jack the Ripper. He was a creepy guy, so of course I was interested how someone could incorporate him into a modern day story. Figures out, Maureen Johnson did a great job.

The setting is in London, obviously. This was quite enjoyable to me. Being a native of the United States, I have always wanted to visit London, along with the rest of Europe, and since I haven't yet, reading about it is the next best thing.

Johnson did a great job with description, never giving too much, but also not holding too much back. During the intense parts of the book, her description helped create the perfect mood.

As for the story...  I liked it. I will not spoil anything, but the way Johnson incorporated Jack the Ripper into the modern day was pretty cool. Not to mention everything else that happens now that Jack is back. Like when Jack the Ripper first existed, no one could find him. No one knew who he was, or why he did what he did.

Rory is one of the select few who can see the man who is causing all the mess. She goes from being a slightly normal boarding school girl with regular human problems and friends, to discovering that she has an ability none of her friends have. She is forced to rethink everything she knows and find a way to deal with her new gift.

What I love about this book is that even though Rory gains a new supernatural ability and meets new friends with the same gift, she doesn't drop her friends from school. She still cares about them and hangs out with them. They are her stability, even when she cannot tell them the truth.

Overall, I thought this was a good book. Granted, the beginning was slow and didn't have much action--I felt like I was floating through the story. I thought it could have been shortened a bit, but it wasn't bad enough to the point that I got bored. I liked it enough and Rory's spunky character made for some good laughs.

I'm interested to see where this story is going. We didn't learn about Rory's new gift until really late in the book, which was slightly annoying (especially since I already guessed what was going on and wanted to know already if I was right or not), so I'm curious about what is going to happen next.

The book left with a slight cliff hanger, but from what I know, the second book is already out. I recommend this book to whoever likes a little supernatural twist to this modern world. It's been a while since I've read a book like this and it made me remember why I like these sorts of books.