Drops of Gold: A Review 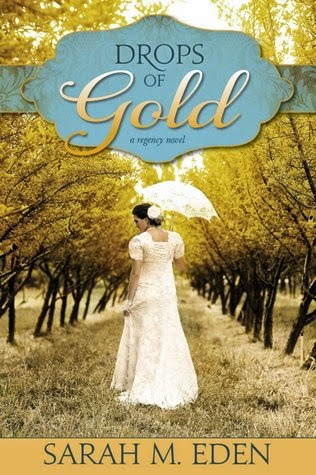 Layton Jonquil has spent the four years since his wife's death in the isolated sanctuary of his home, Farland Meadows, with only his daughter Caroline. Mary Wood, a flame-haired, out-spoken, overly-cheerful governess descends on the household changing both their lives and unearthing secrets Layton would rather remained buried and forgotten. Can one woman bring love back into a house too long without it and reclaim a heart too long broken to heal?

You'll probably see another review from one of Eden's books again. I can't stop reading them!

Drops of Gold was another fantastic read.

Layton has been troubled beyond relief for the good part of nearly five years. He feels so inadequate in the majority of his character. He believes he has failed far too many people. Having first seen his broken heart at the end of Friends and Foes, seeing the full power of it almost brought me to tears.

Marion could not have been the better person for him. Not only is she kind, spunky, quirky, and light hearted. She's a red head! Yay! I am a firm believer every story needs a red head ... Maybe because ginger jokes are commonly thrown at me by my uncle. Good thing I love him and don't offend easily ;)

Anyway, Marion brings happiness into Layton's world of sadness. I love how positive she is despite her many trails in life. She isn't over the top, which is nice, she's simply perfect for Layton.

Their romance is adorable to. Although it does take a one huge, frustrating turn at one part. I understand why it had to happen, but gah! Why couldn't they just admit they love each other?

Of course, that couldn't happen at that moment, but it was resolved and I was happy again.

Obviously I'm in a historical romance mood. And the Jonquil brothers are swoon worthy and adorable at times. I just wish more of the series was out!