The Hourglass Door: A Review 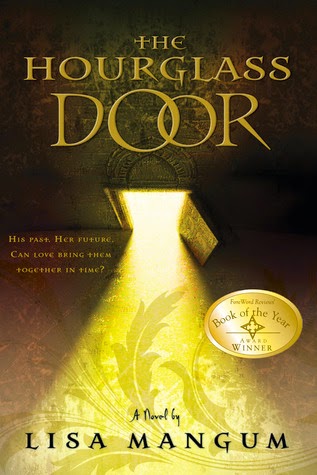 His past. Her future. Can love bring them together in time?Abby's senior year of high school is textbook perfect: She has a handsome and attentive boyfriend, good friends, good grades, and plans to attend college next year. But when she meets Dante Alexander, a foreign-exchange student from Italy, her life suddenly takes a different turn. He's mysterious, and interesting, and unlike anyone she's ever met before. Abby can't deny the growing attraction she feels for him. Nor can she deny the unusual things that seem to happen when Dante is around. Time behaves differently when they are together - traveling too fast or too slow or sometimes seeming to stop altogether. When the band Zero Hour performs at the local hangout, Abby realizes that there's something dangerous about the lead singer, Zo, and his band mates, Tony and V. Oddly, the three of them are also from Italy and have a strange relationship to Dante. They also hold a bizarre influence over their audience when performing. And Abby's best friend, Valerie, is caught in their snare. Dante tells Abby the truth of his past: he once worked for Leonardo Da Vinci, helping to design and build a time machine. When Dante was falsely implicated as a traitor to his country, he was sent through the machine more than five hundred years into the future as punishment. As the past and the present collide, Abby learns that she holds a special power over the flow of time itself. She and Dante must stop Zo from opening the time machine's door and endangering everyone's future. More than one life is at stake and Abby's choice could change everything.

Yes, again, I am reading another book I bought from the ANWA Conference. Lisa Mangum is not only an author but the Editorial Manager for Shadow Mountain. It was a lot of fun getting to know her. She taught a great lesson on pitching books to editors and people that you meet everyday--saying that only with practice will you find the perfect pitch for your book.

It was during this lesson that she used the pitch she had for The Hourglass Door. It was fantastic, so of course I had to buy the trilogy!

This book was super cute. Cute, because the love story was super cheesy. Like, dripping in cheese, but that's okay, because it worked. The book opens up with Abby dating her oldest friend, Jason, but then super sexy, Italian Dante shows up. It was fantastic.

Not only is Dante a hottie, but he was once Leonardo Da Vinci's personal assistant. Crazy, right? And not only was he a friend of Da Vinci's, but he was a key part in building a time machine. Which of course, causes a whole ton of problems which lead to him and Abby falling in love.

The bad guy is really intriguing too. I like him. Books that contain great good guys, as well as bad guys make up for the best stories, especially when the bad guy isn't simply bad because he was meant to be bad. We get a glimpse of his past and why he did what he did, which makes him all the more interesting. He was unpredictable, which I appreciated. It makes for a ton of issues that Abby and Dante have to go through--and it's sort of fun to see how they handle things.

This was pretty slow in the beginning, not much happens, but the end makes up for it. It was a fun read and the second book (which I'm almost done with) flows much faster.

Mangum writes really well, and although the first book may be slow, it flows. It is a nice, cute, easy read!