As You Are: A Review 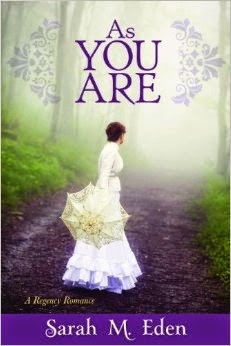 A horse breeder by trade, Corbin Jonquil is more at home in the stables than in the ballroom of his sprawling estate. Corbin is the quietest of the Jonquil brothers and has always faded into the background, contentedly unnoticed. When a mysterious young widow, Mrs. Clara Bentford, moves into the neighborhood, however, Corbin quickly comes to realize that being noticed has its advantages. But how to catch the eye of the lady?

According to his brothers, Corbin need only make a few simple changes to transform himself into the object of any woman's desire - dubious advice, indeed. Following a series of misadventures, Corbin and Clara slowly lower the facades behind which they've been hiding, leaving Corbin shocked by the horrors that haunt the woman he's coming to care for so ardently. When the menace of Clara's past threatens to tear them apart and tensions mount, will the couple have the courage to fight for the promise of forever?

Another great installment from Sarah Eden. As You Are is very unique for the regency era. Corbin is almost painfully shy. And being shy back in those days wasn't good. It meant you didn't have many connections or social standing in society--despite your title. And finding a wife even harder.

Seeing Corbin overcome his shyness was incredible. I was never that shy, but at one point, I was incredibly shy. Thankfully I grew out of it, but Corbin did not. Still, when he meets the love of his life, we see him struggle to find ways to catch her attention. Since Corbin has seven brothers, he gets far too much bad advice, which makes for some great laughs while sympathizing with the embarrassment from his valiant efforts.

Clara isn't technically shy, but she does avoid social calls and gatherings. She has had a hard life, filled with constant horror. She takes care of her daughter and nephew with immense devotion. I love how she puts their safety over her own. I also like how she keeps talking to Corbin despite his shyness.

Their love story has many bumps and misinterpretation, but eventually Corbin comes to her rescue, proving that he can overcome his timidness in order to save the woman he loves.


It was also great to see the other Jonquil brothers too. I have come to love this huge, complex, and yet loving family.