Friends and Foes: A Review 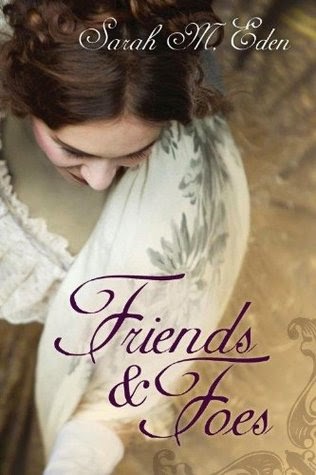 After five years of tracking and capturing spies on English soil, Philip Jonquil, Earl of Lampton, is in pursuit of his last quarry. But at a traveler’s inn, he encounters an unexpected and far more maddening foe: Sorrel Kendrick, a young lady who is strikingly pretty, shockingly outspoken, and entirely unimpressed with him. Indeed, Sorrel cannot believe the nerve of this gentleman, who rudely accuses her of theft and insults her feminine dignity. Doubly annoyed when they both end up at a party hosted by mutual friends, Philip and Sorrel privately declare war on one another. But Philip’s tactics, which range from flirting to indifference, soon backfire as he finds himself reluctantly enjoying Sorrel’s company; and, much to her dismay, Sorrel finds Philip’s odd manner to be increasingly endearing. In the midst of this waning war and growing attraction, Philip catches wind of the French spy he’s been tracking, and Sorrel inadvertently stumbles upon a crucial piece of the puzzle, making her indispensable to the mission. But can two proud hearts negotiate a ceasefire when cooperation matters most?

Let me just start off by saying, Sarah Eden is an amazing author. I had the opportunity to meet her at the ANWA conference a few weeks back. I've been to several of her book signings before, but I actually got to talk to her at the conference. She has a great sense of humor and is incredibly kind. I love it when I meet authors like her. I had the chance to meet several other authors top, but I'll talk about them when I get around to writing about the conference.

Friends and Foes was amazing! I loved coming back to see Philip and his story. We met him briefly in A Kiss of a Stranger, and being able to see the incredible man behind th dandy was awesome. I do admit though, his acting like a fool made for some good laughs.

Sorrel is equally amazing. She has been I injured quite severally, and yet fights on. The strength she possess is nearly shocking. I don't know if I would have been as strong in her position. She is a wonderful sister and underneath the pain, she is beautiful and kind hearted.

Eden does an fantastic job of creating such different characters in a world where everyone was pressured to act and dress the same.

Philip reminded me of the character from The Scarlet Pimpernel which made me laugh. My junior year AP European History teacher had us watch the movie, and whenever Philip acted beyond ridiculous, I thought back to that movie. It was great.

The love story developed perfectly. It was frustrating at times, because Sorrel couldn't overlook her pride and unwillingness to be helped. Still, Philip preserved!

There were some great twists that made this a unique story and a fantastic romance.