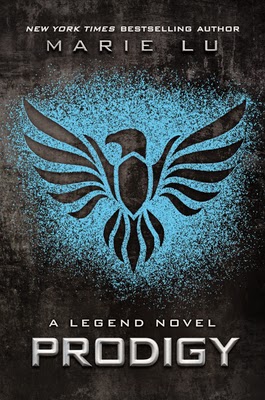 Injured and on the run, it has been seven days since June and Day barely escaped Los Angeles and the Republic with their lives. Day is believed dead having lost his own brother to an execution squad who thought they were assassinating him. June is now the Republic's most wanted traitor. Desperate for help, they turn to the Patriots - a vigilante rebel group sworn to bring down the Republic. But can they trust them or have they unwittingly become pawns in the most terrifying of political games?

Once again I don't really know what to say about this book.

I like this series well enough to keep reading it, and I really like what's happening with the government. This is the first dystopian I've read where the characters actually infiltrate themselves into government positions. Well, maybe infiltrate is the wrong word, but considering the circumstances, I think it fits.

I'm just bothered by how young June and Day are. Yeah, they might be geniuses and all, but still. June might become the second in command of the Republic at fifteen? Even if I were in a dystopian world I still not want a fifteen-year-old assisting a twenty-year-old who is going to rule the country. No matter how famous they are. What fifteen-year-old celebrity do you want ruling the country? Even if June was a part of the military once. Ya, no.

So besides the fact that they are young and their romance seems meant for older characters, I liked this book.

I liked the mystery. The growth June and Day had to go through in order to discover what they really wanted AND who the real bad guys were.

I liked Tess too. I liked how she didn't let Day mess with her head. She did seem a little mature for a thirteen year old, but then again, you already know my age problems.

Let's just say, the plot twist didn't hit me as hard as it probably should have. It did make things more interesting though.

Geez, I sound so negative. I'm not trying to be though. Marie Lu writes beautifully and I love the way she set up this dystopian world. It's unique and I love how she has a different take on how to fix the supposedly "utopian" country.