Born at Midnight: A Review 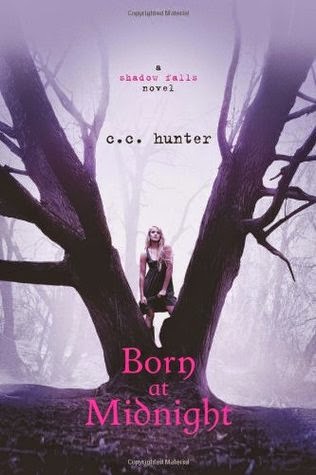 One night Kylie Galen finds herself at the wrong party, with the wrong people, and it changes her life forever. Her mother ships her off to Shadow Falls—a camp for troubled teens, and within hours of arriving, it becomes painfully clear that her fellow campers aren’t just “troubled.” Here at Shadow Falls, vampires, werewolves, shapeshifters, witches and fairies train side by side—learning to harness their powers, control their magic and live in the normal world.

Kylie’s never felt normal, but surely she doesn’t belong here with a bunch of paranormal freaks either. Or does she? They insist Kylie is one of them, and that she was brought here for a reason. As if life wasn’t complicated enough, enter Derek and Lucas. Derek’s a half-fae who’s determined to be her boyfriend, and Lucas is a smokin’ hot werewolf with whom Kylie shares a secret past. Both Derek and Lucas couldn’t be more different, but they both have a powerful hold on her heart.

Even though Kylie feels deeply uncertain about everything, one thing is becoming painfully clear—Shadow Falls is exactly where she belongs…

So this is a series that was highly recommended to me by some of my trusted reading friends. I've been excited to read it for while and well...

I was seriously disappointed.

First of all, I didn't like the main character, Kylie, at all. The good aspects about her was that she was a loyal friend... and I can't think of anything else...

The only thing that made me feel for Kylie was the divorce going on between her parents. That's it.

What I didn't like about her was her indecisiveness and how whiny she was. Frankly, I found her annoying.

The huge reason for my dislike of Kylie and the book was that I was expecting this book to have far more action scenes then it did, and pretty much only focused on Kylie's messed up relationships. Most books have love triangles these days, and I have a love/hate relationship with those and I do love romance in books, but no, Kylie had a love square. She liked three boys, and just could not decide who she liked most. At least toward the end she sort of got rid of one of the guys, and the other disappeared, so she was FORCED into a decision. Gag. I could not have cared less about her relationship with any of these guys. None of them felt genuine, and with two of the boys she met at Shadow Falls, the relationships went too fast and didn't have any... ground? Any... anything, really. Or at least that's what I thought.

That's probably why I disliked this book so much, because the whole time she is juggling three boys and practically nothing else happens. Not to mention the fact that she kept getting all been-out-of-shape about being a supernatural, when clearly she was one, and needed to stop blaming the other campers for being what they were. I'm sure it was a shock, but I didn't like the way she handled it. Sure, if I had been in her situation, I would have freaked out too, but she got so whiny. Not to mention that she kept pissing her roommates off for her lack of tack and rudeness about being who they were.

And then there's the lack of action. Only one significant thing happened right at the end, and that was probably my favorite part, because Kylie finally did something instead of sitting around whining, and trying to juggle her boy problems.

I read till about 37% in the second book, Awake at Dawn, to see if it would get any better. It didn't, it got worse, and I decided I couldn't handle this series anymore. I still have this ringing irritation in my head about something Kylie said to her friend who was having trouble between two guys. Kylie told her that she needed to make a decision who she liked. I mentally face-palmed when I read that. Kylie, who can't decide between THREE boys, was preaching to her friend to make a decision between two. Ugh, it annoyed me so much, and then it just went downhill from there. I just didn't care anymore.

I'm really sad that this series didn't turn out for me. My friends have been talking about it forever, but oh, well. Everyone likes their different styles of writing and books, this one obviously wasn't for me.

As for the content, these books also contain a lot of language. And there's a whole lot of talk about sex, and intimate scenes. The characters don't actually have sex, but they get close to it.