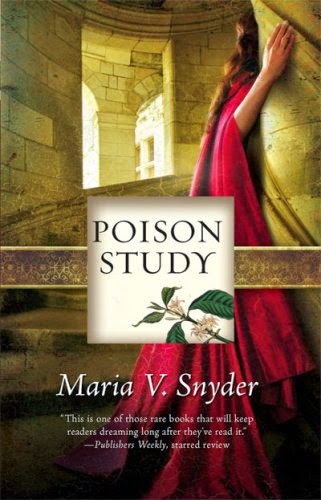 About to be executed for murder, Yelena is offered an extraordinary reprieve. She'll eat the best meals, have rooms in the palace—and risk assassination by anyone trying to kill the Commander of Ixia.

And so Yelena chooses to become a food taster. But the chief of security, leaving nothing to chance, deliberately feeds her Butterfly's Dust—and only by appearing for her daily antidote will she delay an agonizing death from the poison.

As Yelena tries to escape her new dilemma, disasters keep mounting. Rebels plot to seize Ixia and Yelena develops magical powers she can't control. Her life is threatened again and choices must be made. But this time the outcomes aren't so clear...

Poison Study was a book full of characters that I didn't know if I could trust. Betrayal was rampant, as was the mystery of who exactly Yelena was and who she could trust.

After being saved from certain death, Yelena has become the food taster for Ixia's sole leader, the Commander. He has set the torn country up in several military districts, all with one man or woman to command that area of land. It is an interesting concept, seeing the world that Yelena was in--I did enjoy the world building aspects. The south country is considered Ixia's greatest enemy, people who have magic are imprisoned or killed on sight, and the previous royal leaders of this country were assassinated by the Commander and his men.

What is so sad about this book is how Yelena can't find anyone to trust. She doesn't really have friends, and she has to fight every day of her life just to stay alive. She is cursed with a poison that will kill her in two days if she does not receive the antidote each morning from the Commander's right hand man, Valek.

Valek is a dark man, with a dark past. He is an infamous assassin, hard, unrelenting, and fiercely loyal. In the beginning, I hated him. I hated what he did to keep Yelena from running for her life, poisoning her, and making her come see him every morning for the antidote. And yet as the story progresses, we begin to see an unexpected side from him...

Yelena is a strong character who has had a horrible past. She has endured spine chilling horrors, and yet she is unbroken. In fact, when Valek offers her the chance to live--although being a food taster didn't exactly guarentee life--she became even stronger. After many trials, she befriended two guards, who taught her how to defend herself. When she discovers she has magic, her life is in even more danger--the Commander does not tollerate magic. What makes it worse, is that Yelena doesn't know how to control it. Only when she makes a strange connection with a powerful magician, does she stand another chance at surviving.

Anything that could go wrong, goes wrong in this book. And yet, Yelena is strong. She makes her own path to stand on her two feet. She is no one's prisoner, she is her own woman.

The ending of this book gave me hope that Yelena would find a better life, though it was bittersweet at the same time. I'm just glad that this is a series, so I can see Yelena grow even more. She is strong, though incredibly lonely. I really hope that she finds her way back to the ones she loves.