Son of War, Daughter of Chaos: A Review 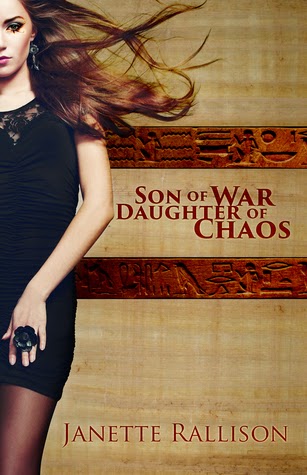 Aislynn is accustomed to watching for the enemy. Her parents instructed her from the time she was young to look for the signs: people with greater than normal strength, eyes that can glow green, and have the ability to jump long distances. Over the years, Aislynn has come to view her parents’ fears as quirks—things that get in the way of having a normal high school life.

When Aislynn’s mother dies under suspicious conditions, her father doubles his restrictions. But all his precautions can’t stop the boy with glowing green eyes from finding Aislynn. She realizes too late she’s been drafted into an ancient Egyptian war, whether she’s prepared or not.

Janette Rallison is one of my favorite authors, and she did not fail me with this book! Also, this review will contain some spoilers.

Son of War, Daughter of Chaos is a novel filled with mystery and adventure as Aislynn tries to discover who she really is.

Aislynn has had a crush on her brother's friend, Dane. He is an observant, athletic, and intelligent young man. He is also cunning, stunningly attractive (in my head at least), and loyal. It's not long until Aislynn finds herself in his arms, drowned in his kisses and his awesome sweetness... Until he drugs her and raids her house.

Everything Aislynn has ever known is being to fall apart at the edges. She once thought her father was crazy for hiding from some unknown enemy, but now the enemy was there, attacking her house.

Aislynn finds herself whisked out of Arizona in mere hours, with her father and brother at her side, holding back many secrets. The most that she really gets out of them is that she is the daughter of both a Setite and a Horusian.

The minute Aislynn realizes that her father and brother are keeping secrets from her, it only gets worse. She is still loyal to her family, even when she learns what Setites do behind the scenes. Even when she discovers that she may have been set up for an arranged marriage.

So much happens to Aislynn that she is left confused, trying to decide who she is. The Setites and Horusians are at a constant war--trying to kill each other. Both sides want her, and though Dane is a Horusian and her family are Setities, she doesn't want to hurt either side.

I felt for Aislynn as she struggled to find out which side she belonged to, things were confusing, and both sides were neither good nor bad. If anything, both sides were leaning more toward the bad. She wanted so desperately to be with her family, but when the secrets of what her father and brother do came out, she found it hard to be around them. She still loved them though.

It's what I liked most about Aislynn. She does her best to fight for what's right, wanting everyone to come out alive and safe. Through much sacrifice, she does all she can to make that happen. And though it's a huge risk, where she could lose her life, she goes along with it, in order to try and save both sides from killing each other.

At least, I hope she succeed... There may or may not be a second book to this one, and I sincerely hope there is, so I can figure out what happens! The book wasn't really left on a cliff hanger, it could end, but I would be sad if it didn't go on. There is so much left that could potentially happen.