My Fair Godmother: A Review 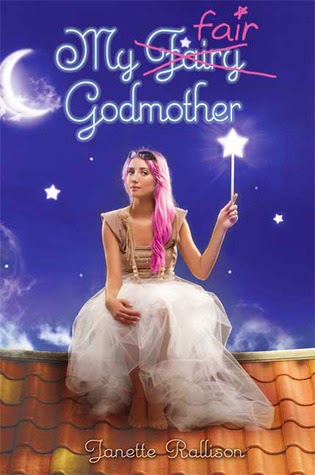 Finding your one true love can be a Grimm experience!

After her boyfriend dumps her for her older sister, sophomore Savannah Delano wishes she could find a true prince to take her to the prom. Enter Chrissy (Chrysanthemum) Everstar: Savannah’s gum-chewing, cell phone–carrying, high heel-wearing Fair Godmother. Showing why she’s only Fair—because she’s not a very good fairy student—Chrissy mistakenly sends Savannah back in time to the Middle Ages, first as Cinderella, then as Snow White. Finally she sends Tristan, a boy in Savannah’s class, back instead to turn him into her prom-worthy prince. When Savannah returns to the Middle Ages to save Tristan, they must team up to defeat a troll, a dragon, and the mysterious and undeniably sexy Black Knight. Laughs abound in this clever fairy tale twist from a master of romantic comedy.

This story is quite excellent. It is clever and it is witty. It follows the story of a second sister whose boyfriend is stolen by her older sister. Sad, right? The story begins with this BOOM of a beginning and I'm left with like a, wow. What could possibly happen next?

And then we see how Savannah meets her incompetent and slightly annoying Fair Godmother, Chrysanthemum Everstar. Frankly, I find the banter between the two slightly amusing, but if I were in Savannah's shoes I would totally smack that Fair Godmother upside her head. I mean, sheesh. She messes up the simplest of wishes like no other.

This results in Savannah spending a lot of time in the Middle Ages. It is very interesting to see a how a modern, preppy, not-so-smart modern girl learns how to survive the hard, demanding work given to servants in the Middle Ages. Yet, surprisingly, Savannah owns up to it. She works hard until she is finally able to contact her aloof Fair Godmother to chide her and say that Chrissy wasn't really helping her. And still, Chrissy messes up even more wishes.

Eventually, Savannah goes to save her friend Tristan from the Middle Ages. It's here when the book gets really funny. Mainly because Tristan is super mad at Savannah for getting him mixed up with all of this. And yet despite his anger, he protects her and does his best to fulfill the wish so that they can finally go home. He is strong and loyal, even when Savannah made some super dumb choices and nearly got herself killed several times. Tristan is a really cool guy and I'm glad that it was him Chrissy involved and not some other guy from Savannah's school.

Savannah is an interesting character. She is kind of an idiot, but she's not an annoying one. Like, she doesn't whine or complain. She just doesn't make the smartest choices all the time. I couldn't help but thinking, could you really be that air headed? And then I remember how and where she was raised as a kid, so I nodded and answered my question. Yes, she really could be that air headed. It was funny though, to see what she put herself through and how she managed to get herself out--although most of the time it was with the help of Tristan. What I loved was that she learned how to become an honest person (well, if she lied, she spit up frogs and such, blech). But she also grew a lot. She got smarter and more genuine. It wasn't all about being the most popular or beautiful anymore. She finally realized that if she were just herself, everything would work out in the end.

Like I mentioned above, Tristan was my favorite. I love how he never went soft on Savannah. She made a ton of dumb choices, but he didn't show sympathy (she did after all, send him to the Middle Ages). Basically he told her to grow up. It was awesome. He wasn't unkind to her or a jerk about it, though. Which made me like him all the more. He was a great love interest and I liked him a lot!

I highly recommend this book to anyone who loved medieval adventures! It was quite a fun ride!

The picture on the right is my (and my mother, Becca aka Paij Slater's, over at My Love for Reading Keeps Growing) signed copy! I saw Janette at an author's night at the Barnes and Noble at the San Tan Gilbert, Arizona Mall! I have been to several of her author events. She is such an amazing person. Not only does she write beautifully, but she is a fabulous person to know. I also got a signed poster for her Slayer's Series under her pen name, C.J. Hill.
Posted by Unknown at 5:00 AM