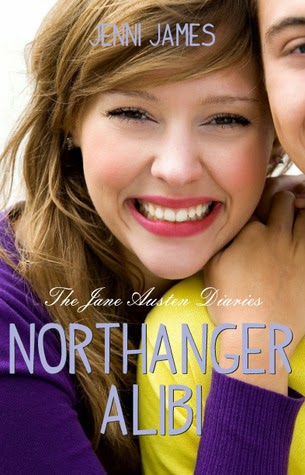 The Russo family and Seattle, Washington, are no match for Claire Hart and her savvy knowledge of all things vampire-related. Thanks to her obsession with the Twilight series, if there is anyone who would know a vampire when she saw one, it's Claire. And she's positive totally hot Tony Russo is a vampire - she just has to prove it!

In this modern retelling of Jane Austen's Northanger Abbey, follow Claire's hilarious journey on her first summer adventure away from home, where she learns everything isn't what it seems, and that in some instances, reality is way better than anything she'd ever find in a book.
My Review:

I haven't read Jane Austen's Northanger Abbey, but this high school summer version of it was absolutely fantastic. It makes me want to read Jane Austin's version. After all, historical romance is my favorite. And Jenni James did a fantastic job of making me love her contemporary version!

This is about the youngest girl of the Hart Family, Claire. She is the girl who has never been kissed, never been on a date, and all around is just ignored by the guys in her hometown of Farmington, New Mexico. And yet, with a surprise trip to Seattle, she suddenly finds herself perused by two boys. Two attractive boys, who seem in her head to be either a werewolf or a vampire...

I found this book very humorous, adorable, and even spunky. The fact that Claire is obsessed with Twilight made me laugh out loud. Her obsession is on the verge of crazy... she genuinely believed that Tony Russo was a vampire. It make for some awesome scenes.

And yet, despite Claire's immaturity in the beginning, I really saw a lot of growth in her in this short novel. She grew up a lot. The love interest, Tony Russo, helped her to do so. He was kind, attractive and real. He helped her see how childish she was acting and even when things got tough between them, Claire began taking things seriously.

I love how everything worked out in the end. It was very clever the way Jenni James created the plot twist. I loved it!

Overall, it was a cute, fun and super fast read. If you love retellings of Jane Austin and adorable contemporary high school romances, I definitely recommend this one! Fantastic!