Looking to rope yourself some Labor Day reads? Well saddle up, 'cuz the entire Sweet Montana Bride series is on sale at last. We've got Reese's Cowboy Kiss, Jade's Cowboy Crush, and Cassie's Cowboy Crave.
Three sweet and steamy clean romance novels complete with cowboys, romance, and happily ever afters. Featuring the witness protection program - rancher style, these ebooks sale for $3.99 a piece, but this week you can snag 'em for just .99 cents each on Amazon. 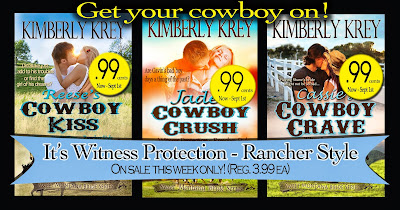 Here's a bit about each book just to whet your appetite. Happy romance reading!

Texan pageant winner, Reese Taylor, has a former classmate
who wants her dead. Now she must leave her friends and family
to enter a protection program on Emerson Ranch. A group of
good-looking cowboys awaits her, but Reese has her eye on
Blake Emerson, the one man too busy with the ranch to
give her a chance.
Blake Emerson has no time to go lookin’ for love. He’s got
a ranch to run, positions to fill, and an ache in his heart
from love gone wrong. So when he agrees to harbor a witness
to help on the ranch, Blake assumes his first two problems are
solved. But he never dreamed his new guest would be a
woman. One he was destined to lose his heart to.
With sparks burning hot and danger around the bend, one
question lingers in his mind: Has he only added to his list
of troubles, or has Blake just found the woman of his dreams?
* Though this novel is considered clean romance, it does contain passionate kissing and a few minor curse words. *

Single mother, Jade Miller, has just witnessed a murder. Now, set to testify against the cold-blooded killer, Jade must be placed under protection. While she is grateful to the kind folks who’ve offered to take in her and her son, Jade is surprised to find the man escorting them from L.A. to Montana is Gavin Emerson. A womanizing, far-too-attractive-for-his-own-good, rebel cowboy. Jade assures Gavin that she has sworn off men until her son is grown, but all too soon she finds herself fighting back feelings for the man who’s agreed to care for them.
Gavin wants nothing to do with ranch life. Not since the ugly fallout he had with his father over eight years ago. But when he agrees to come back, harboring Jade and her son for a time, Gavin falls in love with life on the land once again. Above that, he finds his heart has been captured by his lovely house guest, Jade Miller.
After reservations on both parts, the two are finally ready to open up and give their new-found love a try. Only they aren’t in the clear just yet, and as a dark and deadly threat falls upon them, Gavin finds that his bad-boy past may have led the danger right to their door.
*Though this novel is considered clean romance, it contains passionate kissing & a few mild curse words.*

Cassie's Cowboy Crave:
Twenty-four-year-old Cassie Lovell has a great job, good friends, and an apartment with a killer view. That is, until life is turned upside down. Without the chance to say goodbye, Cassie is forced into a witness protection program on Emerson Ranch. Just when she fears life is doomed, Cassie meets Shane Emerson, the stunningly handsome cowboy who’ll be posing as her newlywed groom.
Shane Emerson is determined not to fall for the woman he’s agreed to harbor. Especially since the whole thing was his family’s way of trying to get him hitched. So why is it when he takes Cassie into his home, Shane wants nothing more than to turn their make-believe marriage into more than just a sham?
In a moment of weakness, Shane steals a kiss.
In return, Cassie steals his heart.
Yet before they confess their undying love,
a hidden danger threatens to tear them apart.
*Though this novel is considered clean romance, it contains passionate kissing & a few mild curse words.*
Posted by Unknown at 5:00 AM