The Reluctant Assassin: A Review 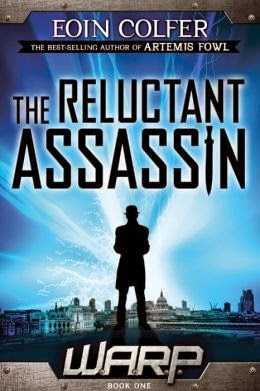 ​The reluctant assassin is Riley, a Victorian boy who is suddenly plucked from his own time and whisked into the twenty-first century, accused of murder and on the run.

Riley has been pulled into the FBI's covert W.A.R.P. operation (Witness Anonymous Relocation Program). He and young FBI Agent Chevie Savano are forced to flee terrifying assassin-for-hire Albert Garrick, who pursues Riley through time and will not stop until he has hunted him down. Barely staying one step ahead, Riley and Chevie must stay alive and stop Garrick returning to his own time with knowledge and power that could change the world forever.

After reading and loving Artemis Fowl, and reading the reviews about how Chevron Savano and Riley are exactly like Holly and Artemis, I was let down.

They are nothing like Holly and Artemis. At all.

Frankly, this book took me by a slightly unpleasant surprise.

Yes, it's been a while since I have read Artemis Fowl and AF is more of a middle grade than a YA, but it seems that Colfer really changed his writing style in this one. Honestly, it threw me off and it took me a while to get into the groove of this story. But I love Eoin Colfer's books, so I stuck with it and then I began to understand why he was writing this way.

This book is pretty complex. There's a lot happening at once. You have to pay attention to detail. Colfer, being the writing genius he did, gave us the right amount of what we needed to know, when we needed to know it. This book was meant to be slightly confusing, because even the main characters didn't know how the heck to overcome the super psycho, Albert Garrick.

Truth be told and once again, I didn't really like this new writing style at the beginning. It bothered me, a lot actually. We jump from person to person without really any indication. We see inside of everyone's head and it made me go a little crazy seeing from that many point of views. Thankfully, as the book increases in intensity, we mainly see it from Riley, Chevron, and Garrick's POV.

That's not to say I didn't end up liking it though. I did. It was just sort of a let down, seeing all the acclaimed reviews and everything. It was kind of all over the place until the very end. I love a good complex book every once in a while, but I usually have a warning. So I'm warning you. It's an action packed story, but you really have to pay attention. I've started the second book and I'm liking it so far, now that I'm used to this new style.

I also didn't really feel anything for the characters. I felt like I was seeing this all through a pair of binoculars. I liked the story well enough, but I just felt like I was floating through it. Garrick scared the living day-lights out of me, so I guess that was a good sign, since he's a super crazy. Chevron and Riley though, I mean, I wanted them to safe and all, but eh. They were the main characters so I knew they would be fine.

I'm going to stick with this though, and I have a feeling that this book will be far better once I read it a second time. For now, I'm in the second book and it's pretty good so far.

Eoin Colfer truly is amazing at writing. I know my review sounds harsh, but I don't want it to be. Those are just my thoughts, and that's it. I love his AF series with all of my heart and I even learned to decipher the fairy language because I loved it so much. (Yes, I am a nerd and yes, I am okay with that).

So off I go to read the second and I have a feeling that I'm going to like it a lot more!