Glimmer of Hope: A Review 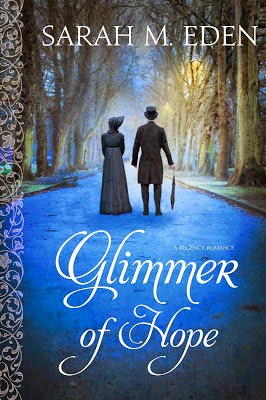 Stunning Miranda Harford once had the world at her feet. She was young, carefree, and desperately in love. But when her new husband left for London without her, her world fell apart. Devastated by his abandonment, Miranda fled their home, taking residence at her husband’s rarely visited countryside estate. For three years, she lived alone. But now, as the holidays draw near, an unexpected visitor arrives . . .

Carter Alexander Harford, Seventh Viscount Devereaux, is a man driven to succeed. His work is his life, and the position of Prime Minister of England is within reach. But in truth, Carter is a man haunted by lost love. Estranged from his beautiful wife, Carter is shocked to find Miranda—the woman he’d loved and who he believes has left him—in residence at his country home.

As plans for a holiday party move forward, the uneasy couple realizes that to avoid further scandal, they must keep up appearances in a charade of marital happiness. Thrust together by fate, it quickly becomes clear that they have both been living beneath a conspired cloud of misunderstanding. As family, career, and social pressures threaten to keep them apart, can love have even a glimmer of hope?

This was a touching story about a couple which has been separated for three years falling back in love with each other.

Carter is a man of standing. He is on his way to becoming Prime Minister, and dedicates his time to his work, trying to ignore his heartbreak over his wife leaving him. Over the past three years, he has gained much ground in the politcal world and is only mere steps away from his mighty goals ... that is, until he goes to one of his many manor homes to entertain his friends with a house party. Here, he finds Miranda, the wife who left him.

Miranda is a sweetheart. Shy, but strong. She married one of the most pretisous men in all of England, a man who helps pass laws in Parliment. A man, who until three years ago was the center of her universe. Now Miranda resides in one of her husbands manor homes, having given up home that he might return to her. That is ... until her once beloved Carter appears and demands her to be hostess of his house party.

Through many miscommunications, heartbreak, and sweet, tender moments, Carter and Miranda begin to unravel the past and befriend each other once more. Though it takes some time, they discover what truly kept them apart. They learn how to trust each other once more, how to love again. I can't get over just how cute this story is. Carter and Miranda are real characters, with real problems, and they handle them in realistic ways. I enjoyed seeing them fall for each other again.

Once again, Sarah M. Eden has written a beautiful Regency Romance which grips your emotions and makes you feel everything the characters are going through.