The Fear: A Review 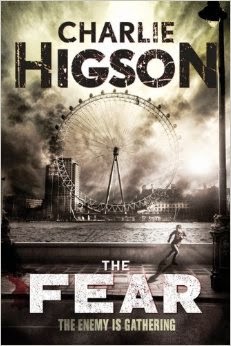 The sickness struck everyone sixteen and over. Mothers and fathers, older brothers, sisters, and best friends. No one escaped its touch. And now children across London are being hunted by ferocious grown-ups who are hungry, bloodthirsty, and not giving up.

DogNut and the rest of his crew, in search of the friends they lost during the fire, set off on a deadly mission from the Tower of London to Buckingham Palace and beyond, as the sickos lie in wait. But who are their friends and who is the enemy in this changed world?


The Fear is the third installment to the enemy series. Once again, I got to see the terrifying world of diseased, children eating adults.

Originally, anyone 16 and older got sick and were turned into boiled-covered monsters. Now it is over a year into the disease, and some of the kids are turning or have already turned 16, but they remain healthy. It makes me wonder ... what caused the disease in the first place and why only people 16 and older get sick? Was this sickness caused by someone? It seems to specific to have been a natural disaster.

One of the characters found a way to keep a science lab up and running, and though he is only fourteen, I do hope that his genius mind will uncover the truth.

Not only are there kids still surviving and somewhat thriving, but the sick adults aren't as mindless as I was once led to believe.

It seems that the enemy isn't as addled and mush-brained as they acted in the first two books. They're getting smarter, remembering certain skills they obtained during their pre-diseased life. It's terrifying. Mindless zombie-like enemies are one thing, but gathering, intelligent, bloodthirsty enemies are a whole other picture.

I am excited to see what will happen next in this series. I had the misfortune of saying goodbye to two of my favorite characters. I figured that since they survived two books, they might survive more ... I was sorely mistaken.

David is one character that has lasted through all three books so far. He is ruler over Buckingham Palace. He is terrifying, weird, and power crazy. His goal is to gain power over all London and then spread his reaches even farther. I'm curious as to how he will go about this, considering there are several other settlements who simply want peace.

A new main character was introduced in this book. Shadowman. More than any other character--other than Sam from the first novel--I want him to live. He is a freaking ninja. He is also intelligent and perceptive.

Let's hope he survives the next book.