Kiss of a Stranger: A Review 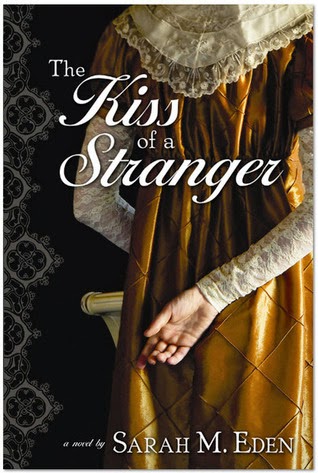 When Crispin, Lord Cavratt, thoroughly and scandalously kisses a serving woman in the garden of a country inn, he assumes the encounter will be of no consequence. But he couldn't be more mistaken--the maid is not only a lady of birth, she's the niece of a very large, exceptionally angry gentlemen, who claims Crispin has compromised his niece beyond redemption. The dismayed young lord has no choice but to marry Miss Catherine Thorndale, who lacks both money and refinement and assumes all men are as vicious as her guardian uncle.

Trapped between an unwanted marriage and a hasty annulment, which would leave his reputation tainted and Catherine's utterly ruined, Crispin begins guiding his wife's transformation from a socially petrified country girl to a lady of society. Their unfolding relationship reveals encouraging surprises for both of them, and privately each of them wonders if theirs may become a true marriage of the heart. But their hopes are dashed when forces conspire to split asunder what fate has granted. As a battle of wits escalates into a life-threatening confrontation, will it be possible for Crispin and Catherine to live happily ever after?

This book was absolutely amazing! It was filled with sweet, tender moments, alongside real life difficult situations (at least, for the 1800's...)

Catherine is a girl who has grown up abused by her uncle's cruelty. She does not know how to truly function in society because her uncle has kept her hidden and dressed like a servant her whole life. Although, when Catherine is married to Crispin, she proves herself far more resourceful and witty than I ever thought she could be. She is kind, funny, and compasionate--all things opposite of her ghastly uncle. I love how her character, though tentative and cautious at first, has proven to be the opposite of weak. She learned how to stand up for herself and not take any nonsesnse from those around her. I loved the growth I saw in her.

Crispin was awesome. He was such a gentleman in many ways. Although he was roped into marrying Catherine, he treated her with the utmost respect and protected her from her evil uncle. I loved how he didn't go straight into an annulment, knowing that it would ruin Catherine entirely. He wanted to save her from the harsh realities of society.

And then, as Crispin's friend said it, he did one of the most unthinkable things in society back then: He fell in love with his wife.

Crispin finally learned how to love someone outside his family, and Catherine learned how to trust. Though they went through some tense parts in their relationship, they finally discovered that they had fallen for each other and admitted it.

I loved this book! Sarah M. Eden has done it again :)