I Hunt Killers: A Review 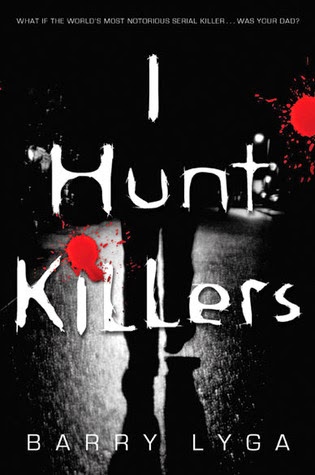 What if the world's worst serial killer...was your dad?

Jasper "Jazz" Dent is a likable teenager. A charmer, one might say.

But he's also the son of the world's most infamous serial killer, and for Dear Old Dad, Take Your Son to Work Day was year-round. Jazz has witnessed crime scenes the way cops wish they could—from the criminal's point of view.

And now bodies are piling up in Lobo's Nod.

In an effort to clear his name, Jazz joins the police in a hunt for a new serial killer. But Jazz has a secret—could he be more like his father than anyone knows?

This book was terrifying. Why? Well, because it is about serial killers. And unlike The Enemy series I'm reading--which is about zombies--serial killers actually exist, are actually that crazy, and do those horrible things. That's what made this book so freaky.

Not to mention the writing was good ... as are the descriptions of certain things. I was drawn into the story, amazing and horrified at the same time. It was even worse when the POV switched to the serial killer. *Shudder*

Jasper Dent aka Jazz is the son of the infamous Billy Dent. A man who has killed nearly 150 people with no regrets, and has taught Jazz how to do the same. Thankfully, Billy had been thrown into jail four years earlier and now Jazz is trying to live a normal life.

Unfortunately, serial killers find themselves drawn to him.

This is definitely a thriller in one way. We are kept in suspense and mystery as to who the killer is (for when it goes to the serial killer's POV, his name isn't mentioned, just his killer title The Impressionist). Jazz knows he is being hunted right along with all the victims that keep showing up.

With the help of the police chef, his best friend, Howie, and his girlfriend, Connie, Jazz sets out to find who is murdering all these innocent people--some even close friends.

This isn't a book for delicate minds, that's for sure. The situations were realistic, as were ALL the characters. I believe that's why it was so creepy.